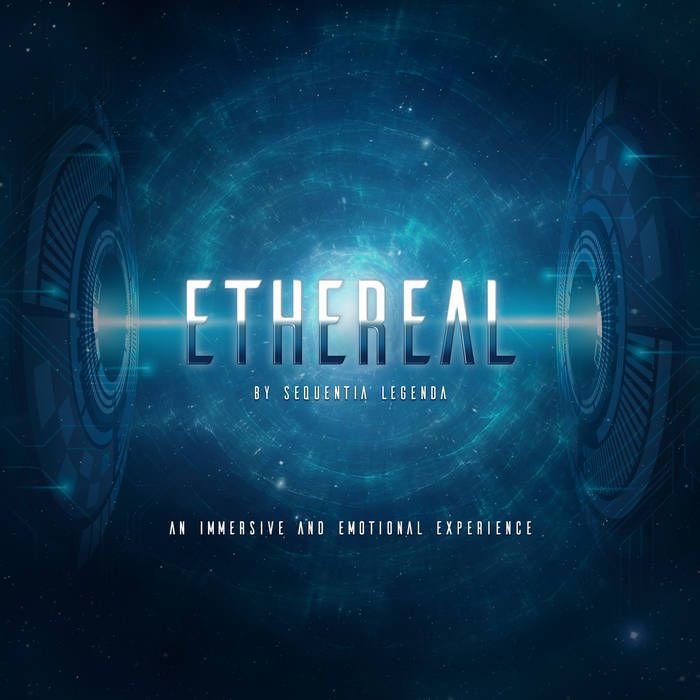 Martin Richter my comment from the previous AMIRA album also fully applies for this album: Long tracks that inevitably provoke memories - and just the best ones! - of some of the most intriguing Klaus Schulze albums decades earlier. Here in a fresh, modernized yet enigmatic sound. Favorite track: Stratums of Seraphic Voices.

Richard Gürtler 70 minutes long "Ethereal" is another highly accomplished album by Sequentia Legenda and especially its third chapter showcases the more distinguishing approach in carving profoundly enigmatic, yet insistently sequencer-driven vintage-futuristic electronica. A very good move indeed!!! The mastery and potential were already abundantly exhibited on each release, so why not to go even further and reaching the iconic position of nowadays milestones in sequencer-based resurgences...

Robert Wallace Ooooooo this one is a bit special. It's hard to put into words how brilliant this album is. As soon as you hear the first few seconds of the first track it's to late, you'll already be sucked into that beautiful space of floating, relaxing, dreamy subconsciousness. The music here demands the lights off, a warm drink and total concentration. It's well worth it, again and again and again. Favorite track: Around the Second Moon.

synthforever Words cannot describe the beauty here, I cried when the first tract started, music made it's way immediately to the most tender and vulnerable places in my mind and soul and began to feed it, it a so tender and loving energy,soothe away longings and bring such a profound peacefulness! I am in complete awe,profoundly beautiful and warm,Thank you both!!! Favorite track: Stratums of Seraphic Voices.

wafiii Laurent Schieber has done it again! Just when you think the Berlin School sound has been played out, Laurent releases something new that just keeps upping the ante! The second of these three epics of progressive electronic music may be my favorite Berlin School song ever made! Favorite track: Around the Second Moon.

"This opus will be an immersive and emotional experience, a tribute to the legendary Moog modular. ETHEREAL is an album full of emotions, which are present through the sequences and the sonic texture. The Moog Modular brings a particular color to the sound palette of this new opus. I wanted to achieve a result in harmony with my vision of the Berlin school: an extension of this musical movement" Laurent Schieber (Sequentia Legenda)

📝 Review of Sylvain Lupari: “A true lover of Klaus Schulze music, Sequentia Legenda goes beyond in his quest to reproduce the essence of retro Berlin School with this exquisite Ethereal. A must!”

A splendid synth layer sculpted in ether spreads its wavering horizons and anchors "Stratums of Seraphic Voices" very solidly at the bottom of our eardrums. The percussions which follow adopt a charmingly hypnotic pace. A pace that several will recognize in the one that Klaus Schulze exposed in 77, with the Body Love album and the track Nowhere - Now Here, but in a clearly slower structure and a more morphic one. Built around 3 long tracks with slow minimalist evolutions, “Ethereal” is an album conceived in homage to the legendary Moog Modular and by ricochet to Klaus Schulze and his musical mirages. And digging for those delicious perfumes of the old days which rocked and flooded our ears for a too short period of time, Laurent Schieber signs here an album more than seducing which respects this will of Sequentia Legenda to recreate the atmospheres of retro Berlin School.

In its minimalist envelope, holed of beautiful nuances which amplify the charms of the ethereal voices, "Stratums of Seraphic Voices" presents an intrusive structure with a pace which wins subtly in velocity and clearly more aggressive percussions. From its anesthetic shape, the music became more lively with a good game of the percussions and with cosmic effects from a synth which is more discreet at the level of the solos, there is none, but which is also more generous at the level of the textures of voices and layers filled of soft fragrances of ether. About 30 minutes on a minimalist morphic theme which ran out without any feeling of lassitude! There was only Klaus Schulze to make a success of such exploit. Laurent Schieber does as the master and this to perfection.

"Around the Second Moon" is a superb title which shows that Sequentia Legenda doesn't feed his repertoire by imitating systematically Klaus Schulze. Always in a minimalist approach, the music skips slightly in a deliciously organic and stroboscopic form. This a little bit unusual rhythmic loop is fed of effects which squeak and which vacillate in mini circular structures and in immense anesthetic layers. The tempo is structured on tom-tom percussions among which the beatings, which never run out, go to the opposite sense of the perpetual loops which are still squeaking. The percussions inject a vibe of acid electronic rock at the gate of the 7th minute. These percussions pull the hypnotic rhythm of "Around the Second Moon" towards an even more explosive tangent after the 13th minute point. Between these phases, Sequentia Legenda decorates his music of various effects and of layers always so foggy. Besides, this last very puzzling phase and the movement of the sequences which squeak literally remind me in of the track The Who in Won't Get Fooled Again. A delight for those who like when that rocks! This wild movement loses of its swiftness towards the 17th minute by being swallowed and smothered by a seraphic choir. And beneath a dense nebulosity of those huge layers of voices, the sleeping beat seeks always to be reanimated. I found that as much good than beautiful and original.

"Elevation" brings us back to the Moondawn period of Klaus Schulze with huge shoals of fog and of faded voices which enclose a structure which always gets vivificated beneath the embraces of sedative layers. There is storm below these layers. A storm arisen from the percussions of which the keen and heavy rollings are forced to the anonymity, so much the strength of the shoals injects continually an anesthetizing effect in a rhythmic which doesn't stop hammering its mute revolt. It's around at the 14th minute that "Elevation" gets loosens from the layers of mist and voices, drifting into a superb rhythmic debacle worthy of the great master of analog rhythms and sounds who is also at the origin of Sequentia Legenda's music. I am not certain, but I believe to hear the whistling of a synth roaming towards the finale. And it's the only slight drawback to this wonderful music of “Ethereal”; the lack of synth solos. As soon as Laurent Schieber will be less hampered and will be free of any constraints, his music will shine in the firmament of the big names of EM. But that doesn't change the fact to “Ethereal” is a great journey in the time of the analog. Offered on real CD in a nice Digipack as well as in a download format, “Ethereal” is a must to all fans of Klaus Schulze, era 76-77.

The link to the original review: synthsequences.blogspot.fr/2017/08/sequentia-legenda-ethereal-2017.html

All rights of the producer and of the owner of the recorded work reserved Unauthorized copying, hiring, lending, public performance and broadcasting of this recording prohibited

Sequentia Legenda is a musician who grew up permeated throughout by electronic music of the 70s and by the “Berlin School" musical movement. The mystical and atmospheric music of Sequentia Legenda is composed by a combination of atmospheric pad and melodic lines of synthesizers, punctuated with the phrasing of sequencers. The musical journey carries you along in a cosmic musical vision. ... more

Bandcamp Daily  your guide to the world of Bandcamp

Cannibal Corpse's George "Corpsegrinder" Fisher stops by for an interview